Unsöld's Factory Hotel at a Glance

Unsöld's Factory Hotel has a total of 62 rooms divided into various categories: from the small 12-square-metre classic room with a French bed to the 68-square-metre penthouse suite with a roof terrace and a view over the rooftops of the city, there is a room to suit every requirement. The rooms are clearly structured and echo the natural materials that are characteristic of the hotel. Wood, steel, leather. Blue tones, grey tones, a coordinated lighting concept that perfectly sets the scene for the hotel’s design and material concepts. Small selected elements such as the water motifs on the shower partition skilfully pick up on the general design theme of the hotel and its history.

The central place of Unsöld's Factory Hotel is the lounge. The defining element is the stylish combination of the bar with the reception. The lounge is a place to stay and a central meeting point in one. The general design is dominated by the modern industrial style. It is appropriately combined with elements from the history of the hotel. Old pictures of the ice rink, marble from the inventory, as well as the old ceiling with its striking structure, which was livened up with bright bronze paint. This creates a cosy atmosphere not least due to defining elements of artworks that are integrated into the room. Of course, the theme of water and ice also plays the central role here. Artist and sculptor Claudia von Funcke was instrumental in setting the scene for the space. For example, a “FLUID WALL”, which is equipped with approximately 4,000 differently cut lenses that seem to be constantly in motion and thus give the illusion of a water-like surface. Or the “ice bars” created using industrial glass, metal foil and lighting effects, which illuminate the bar using daylight. 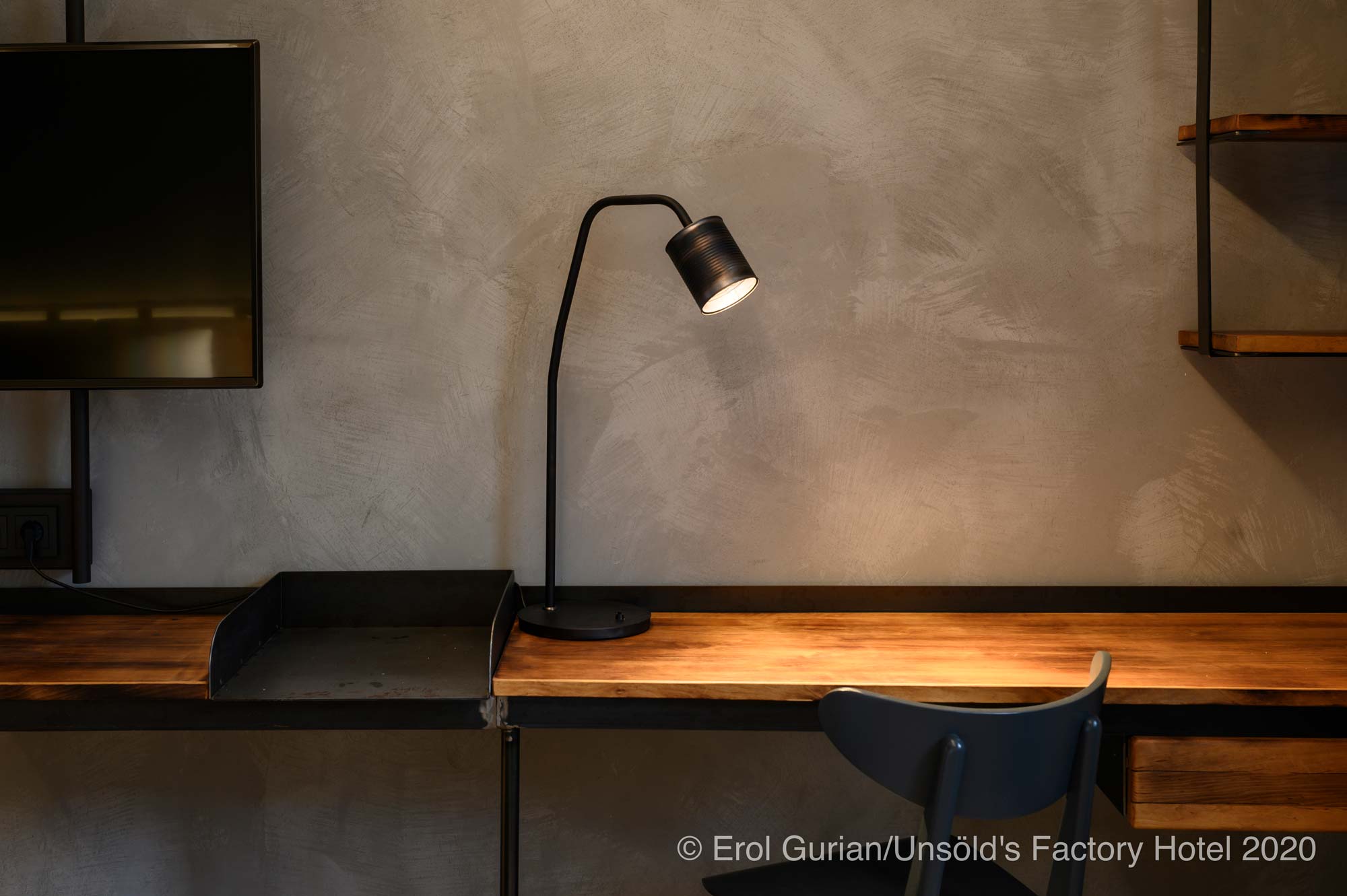 The building was erected as a hotel for the 1972 Olympic Games and opened under the name Ariston whereby only high-quality materials, such as Italian marble inside and on the façade, were used. During room renovations in 1997, it was decided that oiled solid wood furniture rather than the usual veneered chipboard furniture would be used.

Admittedly, in order to meet current regulations many things are new. Nevertheless, there was a lot of upcycling carried out in the hotel. “We wanted to reuse as much of the existing elements as possible that had made the hotel so attractive in the past, or reuse them in a modified form. As a result, the planning costs were greater, but not the comparable pure construction costs.”

Marble façade slabs that could no longer be preserved on the exterior were reformatted and reused on the interior as window sills and column cladding. Every effort has also been made to preserve the special acoustic ceiling in the lounge, and it has been given a touch of modernity with a bronze-coloured paint job. A large part of the previous furniture made of South Tyrolean alder wood has been reworked by an artisan into desks, shelves and trestles. Each desk in the rooms is therefore a unique piece of craftsmanship from Claudia Rinneberg's team.

Learn more about our history